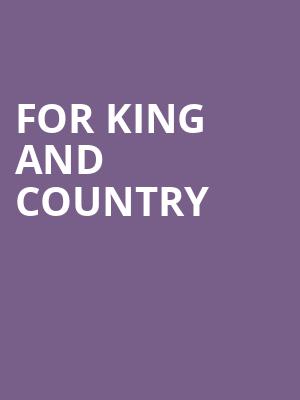 For King And Country

Since bursting onto the scene in 2010 with their debut album, Crave - which peaked at No. 4 on Top Christian Albums - they've built a large fanbase that's continuously expanding; much of that success is word-of-mouth response from their exciting concerts

Why See For King And Country?

Hailing from the land of Oz, Christian Contemporary Music duo For King And Country have taken their new homeland by storm with soaring praise anthems, emotionally-charged lyrics and a reputation for theatrical, percussive and high-energy live shows that keeps their fan base growing. Brothers Joel and Luke are set to capitalize on the Grammy Award-winning success of their first album with their third studio album Burn The Ships.

Over the last few weeks, King and Country have been giving their fans everything and more. Starting with the release of Burn the Ships, which proved hard work pays off after sailing to No. 7 on the all-genre Billboard 200 Albums Chart. The leading single 'Joy reached No. 30 on the Hot AC Chart.

Never ones to rest on their laurels, the pop-rockers are presenting their album in a unique way and doing something they've never done before. Performing in a select amount of intimate venues, they'll be fusing their new material with fresh stories and captivating set design. If the album's lead single 'Joy's' 8.2 million streams and upbeat, infectious melodies are anything to go by, For King And Country return to the road on fine form, spreading positivity and uncomplicated, satisfying music wherever they roam.

Kathy Mullis And Allison Mullis: “For King and Country. ”

These guys and the band are AMAZING! The opening song Little Drummer... more

Tina: “For king and country”

Absolutely awesome concert and music...you won't even believe it is Christianmusic... more

Sound good to you? Share this page on social media and let your friends know about For King And Country at Toyota Oakdale Theatre.