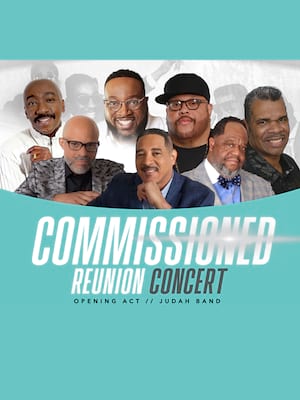 Even though Commissioned broke up in 1999, the band's members continue to leave a giant footprint on the gospel music world.

One of the most evangelically-charged and highly spirited gospel acts in the business, Commissioned was founded in 1984 by the future stars Fred Hammond, Keith Staten, Michael Brooks, Marvin Sapp and more, all who went on to have successful solo careers in their own right. The outfit's busy members come together once more for an extra special reunion tour!

Over the course of twelve albums, released between 1985 and 2002, Commissioned rode high in the Gospel and Contemporary Christian charts and cultivated a fervent following of fans thanks to their exciting live show filled with urban originals, electrifying covers, and uplifting energy. The line-up for this latest tour includes Fred Hammond, Michael Brooks, Keith Staten, Marvin Sapp, Karl Reid, Mitchell Jones, and Michael Williams.

The tour was okay. It was a Fred Hammond Production... a “Consicals”... more

Sound good to you? Share this page on social media and let your friends know about Commissioned Reunion at Toyota Oakdale Theatre.